Aircrete a Reflection of Ancient Concrete


I hope that much is well with you!

The crowd funding campaign launched on my behalf is now live at   https://www.gofundme.com/help-patricia-save-health-with-home

~~~~~~~~~~~~~
The soil test for my septic occurred on an 80+ degree day in early May and I was so very happy that my friend was there, as the most I could do was stand in the shade.  Testing went well; water and energy systems have been determined and plans for implementing each are under way, or in development.

Aircrete a Reflection of Ancient Concrete
As I research aircrete so that I can adequately respond to questions I have and those by others as to, for instance, why it seemed right to use basalt.  In search for answers regarding ingredients I have chosen to incorporate, I find myself exploring beautiful glimpses of past historical remains.  As a youth, I loved History class.  The teacher presented the past in such a way that I could remember almost everything she said,  and in association, much of what I read in assignment.  The storyteller was retired and for many years my interest waned.  Now, I wish I could recall that teachers name and another who taught Sophomore English, because they were both positively wonderful and continue to be cherished by me many decades later.

Our ancient humans were pretty amazing!  They left so much for us to build upon!  How did they come to know what they knew?  Scientist are studying historical remains with hopes of reclaiming some of this forgotten knowledge.

According to A History of Concrete by Nick Gromicko and Kenton Shepard on the International Home Inspectors web site, “The first concrete-like structures were built by the Nabataea traders or Bedouins in southern Syria and northern Jordan around 6500 BC.  Once discovering cement that hardens underwater by 700 BC, they were building kilns to supply mortar for the construction of rubble-wall homes and secret waterproof cisterns that allowed there people to survive in the desert.  If you want a very thorough read of concrete in a historical time sense up to the present, visit https://www.nachi.org/history-of-concrete.htm. 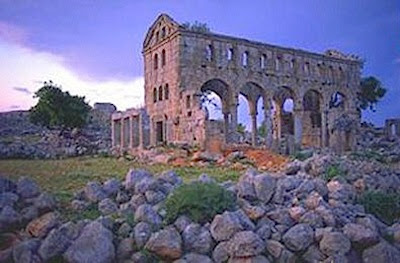 The remains of an ancient Nabataea building - Wikipedia

Wikipedia states that Roman concrete, also called opus caementicium, was a material used in construction during the late Roman Republic until the fading of the Roman Empire. Roman concrete was based on hydraulic-setting cement.  Roman concrete is durable due to its incorporation of volcanic ash, which prevents cracks from spreading.  It is uncertain when Roman concrete was developed, but it was clearly in widespread and customary use from about 150 BC; some scholars believe it was developed a century before that.[1]

So what is concrete and when did aircrete arrive on the concrete scene?  Concrete is a binder that is mixed with water and hardens over time.  In 1923, Scandinavian architect Axel Eriksson discovered that the moist mixture of cement, lime, gypsum (anhydrite), finely ground sand and most importantly aluminum powder causes the mixture to expand.  This “foamed” mixture could then be steam pressurized (autoclaved) to cure it. 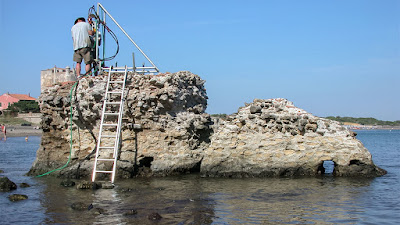 Here scientist take a new look inside 2,000-year-old concrete.  “This work ultimately could lead to a wider adoption of concrete manufacturing techniques with less environmental impact than modern Portland cement manufacturing processes, which require high-temperature kilns. These are a significant contributor to industrial carbon dioxide emissions, which add to the buildup of greenhouse gases in Earth’s atmosphere.

In order for Roman concrete recipes and practices ( such as “laid concrete”) to gain more traction, Jackson said, test structures will be needed to evaluate the long-term properties of marine structures built with volcanic rock and measure how they stack up against the properties of steel-reinforced concrete, for example. [2]

As I explored the subject of aircrete and reflected on ancient concrete ideas and recipes I also considered my experiences working with a paperclay product I’ve used off and on for a number of decades whose key ingredient is volcanic ash.  So I had a firm idea of my aircrete ingredients by the time I confirmed on my builder.  My recipe uses basalt and volcanic ash as inclusions.  I am very pleased to find that volcanic substances were an essential part of historical concrete mixes and that currently; this seems to be the primary reason for surviving historical examples!

I also considered marble dust as an inclusion because I’d seen it successfully used in composition stone casting.  Designing-and-Building-with-Aircrete states that “During the cutting process, 20-30% of a marble block becomes waste marble powder. Marble powder is a waste material generated in considerable amounts in the world. Marble waste leads to a serious environmental problem as well. Therefore, the use of waste marble in the concrete production as an admixture material or aggregate has increasingly become an important issue.” [3]

A friend recently asked, “Why a dome when I could make any house shape desired with aircrete?”  I intuitively thought, it uses fewer materials but wanted to find something to verify or correct my answer.  According to How Stuff Works “Spheres enclose a maximum of space with a minimum of materials, and they don't require interior supports. … “The spherical design results in highly efficient and effective air circulation in both summer and winter. Less surface area makes these buildings less susceptible to temperature changes, and thus, inexpensive to heat and cool as compared to rectangular homes. The aerodynamic exterior means cold and warm air flows around the structure instead of forcing its way into the interior.” [4].  And, the dome is a very beautiful form that is often found in nature!

Much joy to you!

Thanks for your input!